Sing, dance and celebrate with GEISHA-MANIA!™ -- it's this summer's "Gangnam Style"! 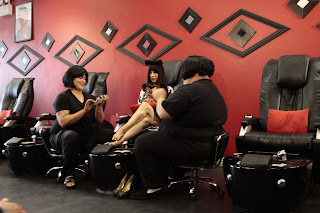 “Memoirs of a Geisha-in-the-Making” … brilliant wordplay or dumb luck? Admittedly, I sometimes enjoy reveling in my own wit, but that’s just me thinking I’m clever. On days when I’m usually the only one thinking it. Titles aside, this foray into comedic rap is a real-life experiment with my silly little real life standing, very un-geisha like, center stage – all science-y and fun and psychological. (Maybe not science-y and psychological, but def fun. At least for me.)
Why would a white girl from the Bronx go geisha – and what in the hell does that even mean? Mind you, I use the term “girl” loosely. (Very loosely.) But first, my disclaimer. I’m a middle-aged, okay-looking ex-New Yorker who just happens to know Harry Winston from Hermes — which still leaves me as the underdog. And who doesn’t love that? Exactly. Politically incorrect? I’m notorious for laughing at all the wrong things at all the worst times. Out to lunch? Guilty. (Could be hormonal. Just sayin’. ) In fact, I’m such an unlikely (but mostly likeable) crazy-ass long shot, that this could actually work.
It wasn’t easy leaving the comfort zone I lounged in for the last eight years – steady paychecks and health insurance have an upside. When I was one of 150 people laid off from the “happiest place on Earth” last September, I seriously couldn’t believe my luck (or lack thereof, TBD by downloads and merch sales.). Giddy elation surged through what was left of an overworked, overwhelmed, and over-fried brain … my long-awaited “window” had arrived. And although I wasn’t sure if it was shock, delusions of grandeur, or both, this moment begged to be spun into gold. Could it finally be my time? All fired up, I decided to give it one last snarky go. Because if not now, when?
And just like that, GEISHA-MANIA!™ became my sole focus – the character and song I’d been trying to figure out forever suddenly manifested. Talk about divine intervention. I truly believed I could pull it off. What was stopping me? (Certainly not the fact I had no clue what I was getting myself into.) I’ll spill all the juicy deets, but first let’s get over the obvious.
I may not be as young or rich or beauteous as some, but I’ve got cool shoes, incredible vision, and a self-effacing sense of humor. (I’ve counted more than a few random moments that leave me totally tickled with myself. See Par. 1.) If Lisa Vanderpump could bring it on, then gosh damnit, so could I. Yes bitches, wrinkles RULE … except when slathered with white face paint. Hence my, or shall I say Lady Geisha’s, “au naturel” look. Let’s leave the real scaring for Halloween, right?
Stay tuned for more on how the song came to be … time for dance class. (I like to spread out these little ‘gems’ for your enjoyment.)
xoxo
Posted by BLAZIN' GEISHA!® at 2:46 AM No comments:

Writing my first official blog entry as, ahem, “Lady Geisha,” all I can say is, “Como estas, babydolls!” (Scream-laughing optional.) “Memoirs of a Geisha-in-the-Making” is my twisted tale of how this GEISHA-MANIA!™ craziness came to be — AKA, my back story. (Which is not, BTW, just about glitz, glam, and that secret touch to make him man.)
It’s more like a big, fat, juicy gift to all the underdogs and cray-dream believers out there who never took their shot, put themselves on the line, or allowed fate to prove they “could’ve been the proverbial contender.” Hell, I STILL don’t know …  and maybe never will. (Hopefully, you’ll all be ever-so-kind, download the damn song, and maybe, just maybe, buy a t-shirt. Or ten?)
I definitely know I stepped well out of my comfort zone and gave myself permission to try something new — while adding“recording artist” to my repertoire in the interim (still hard to grasp even though I hate being pigeon-holed). I’m the first to admit I’m NOT a singer in the traditional sense of the word. No news there. But does one actually have to “sing” to top the proverbial charts? Just sayin’.
For someone who considers herself a successful “career chameleon,” I totally recommend this reinventing life concept. I’ve gone from creating art/design, greeting cards, and costume jewelry to writing for a major studio/entertainment conglomerate. But this is the very first time I’ve ever felt so raw, so exposed — and it’s not often semi-jaded adults get to play newborn. (Keyword: PLAY. Isn’t it strange how we forget that it’s fun?)
Lying around my white-girl geisha lair conceiving GEISHA-MANIA! was one thing, but cross-dressing geishas, sushi bikinis, and my very own “Flava Flav”-style sugar daddy took tight little topknots beyond a “Gaga-goes-Gangnam” level. Not to mention our own original dance moves that’ll trollop Psy’s horse steps. (Yes, I said sushi bikinis, but you’ll just have to watch the video — no spoilers here.) Oh, and don’t forget the kimono-clad Chihuahuas. Six of’em, totally to die for, and I’m just getting warmed up.
Yes, I was up, down, and all over Santee Alley trying to bring this project to fruition. It surpassed labor-of-love status and I now enjoy the sleeping disorder to prove it. But has that (or the many, MANY disapproving eyes) stopped me? Ummmm, nope. I’m from the Bronx bitches — we defined having “elephant skin.” And for those who couldn’t guess, my motto throughout this journey has been “F*CK THAT NOISE.” (A modern-day, albeit very un-geisha like, twist on “Illegitimi non carborundum.” Take note: I thrive on proving people wrong.)
Let’s not get crazy, there were plenty of tears. Everyone involved cried at some point. Giving birth was easier … but I’d repeat every single second in a heartbeat. It’s been a frightening, frustrating, FABULOUS experience, thanks to the amazing support of my family, friends, cast and crew. (You ALL know who you are. Hugs.)
Here’s my take on writing/recording a song, conceiving/producing a music video, creating an original dance, garnering media attention (hopefully lots), and potentially beginning a mid-life career as a “recording artist” – sometimes with lengthy explanation, often without. Sometimes I might just say “Duh” and leave it up to your own imagination. Either way, these are my memoirs an’ I can say what I want.
And there you have it. Please join my adventures, laugh, well up, or click back to Candy Crush Saga if you must. Whatever. Just remember, it’s a blog, not the Great American Novel. So if I mess up, get a grip. It’s entertainment — not brain surgery. xoxo
Posted by BLAZIN' GEISHA!® at 2:26 AM No comments: