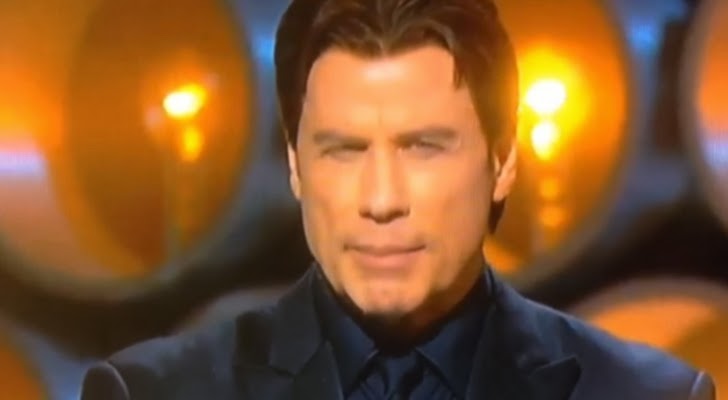 Ok, so he f'd up. Pretty bad. But for the love of all things silicone in LaLa Land, isn't John Travolta allowed to experience at least one senior moment? Seriously, throw the guy a bone. After the age of 30, these things happen to all of us -- just this morning I almost started eating cereal with a screwdriver. Don't worry, it's never seen the light of actual screws, but imagine that? Of course, I wasn't introducing anyone at the most prestigious awards ceremony of the year, nor was it broadcast to millions of judgmental smartasses with Twitter accounts (a minor detail), but still.

Perhaps it would've been less of a media frenzy if John had spazzed out at Starbucks and ordered a fat-free "Kill Barbarinoccaccino" (grande, please, in a yellow cup), but the man is 60 freakin' years old! Impossible, I know. To top it off (no pun intended), his new Ken-doll hair seems to be working some strange, mystical voodoo even beyond the Church of Scientology's control. They're invariably the masterminds behind this mess ... and here's why.

At the mother church somewhere in Riverside county, Xenu's minions have been sprinkling John with cursed chia seeds over the years as payback for "Urban Cowboy." Silly, sweet, beautiful John honestly believes it's an old Sicilian (READ: alien) blessing to thank him for being so generous, but he has zero clue any abracadabra's at work. (BTW, John's quite the foodie and even snagged a few stragglers with his tongue as they danced off his scalp -- mangiare!)

Well, wouldn't you know, those sly little germinating bastages finally decided to seek revenge at last night's Oscars -- all while channeling Christopher Walken! (Everyone heard him pronounce "wi-cked-ly," a blatant CW rip-off if there ever was.) Talk about inopportune ... I mean, what would Christopher Walken do?

No one--not John or even L. Ron himself--could have predicted JT's Gozer-the-Gozerian hair takeover. (Maybe Linda Blair or Bill Murray, but she was MIA and he was busy workin' his Ghostbuster mojo to pay homage to Harold Ramis -- and rightfully so. The man was amazing.) Why is it possessed people are never in on the joke? I feel for the aging idol, but my Starbucks scenario would've been much easier, less public, and somewhat comforting on a rainy day. "Oops, did I say that? Brain fart!" A quick laugh, a few tweets at best (less than a million), and everyone goes home. Simple.

What's most important here is the fact that John's misstep obviously launched the careers of several quick-thinking writers and comedians now claiming to be the infamous Adele Dazeem! BOOM. (Not that that was too difficult.) All for the bargain price of being glued to your television and a Twitter parody account. Who cares if she's real -- or if John's losing his marbles? THAT BITCH MADE HISTORY.

Maybe it's another senior moment, but even I can't remember the "Frozen" singer's actual name. (Not that I care either.) Purely coincidental? Nah. Pure genius? You can bet y'er dog-eared copies of "Dianetics" it is. And that, my friends, is not only some serious subterfuge (courtesy the Church of Scientology), but also a starving artist's dream come true (or anyone determined to break into the biz). Kudos to all who jumped on the bandwagon at poor, bewitched John's expense -- enjoy your 15 minutes. Let's see if you're clever enough to parlay that into human years, hmmmm? (In other words, "Up YOUR nose with a rubber hose!")

So kids, what have we learned today? Let seniors be seniors. (Even the old, funky-smelling ones.) Never trust chia pets you don't know. (Or church ladies.) Don't eat demonic seeds. (With or without marinara.) Last but not least, honor otherworldly entities that put Jerm Travinksi, um, John Travolta, under a trance so that, pretty please, he'll do it again -- only this time while F'ING UP MY NAME on national TV. Lordy Geesh has a nice ring to it, no? xo