PUT YOUR MONEY WHERE YOUR FACEBOOK STATUS IS & RAISE MONEY FOR A CURE! 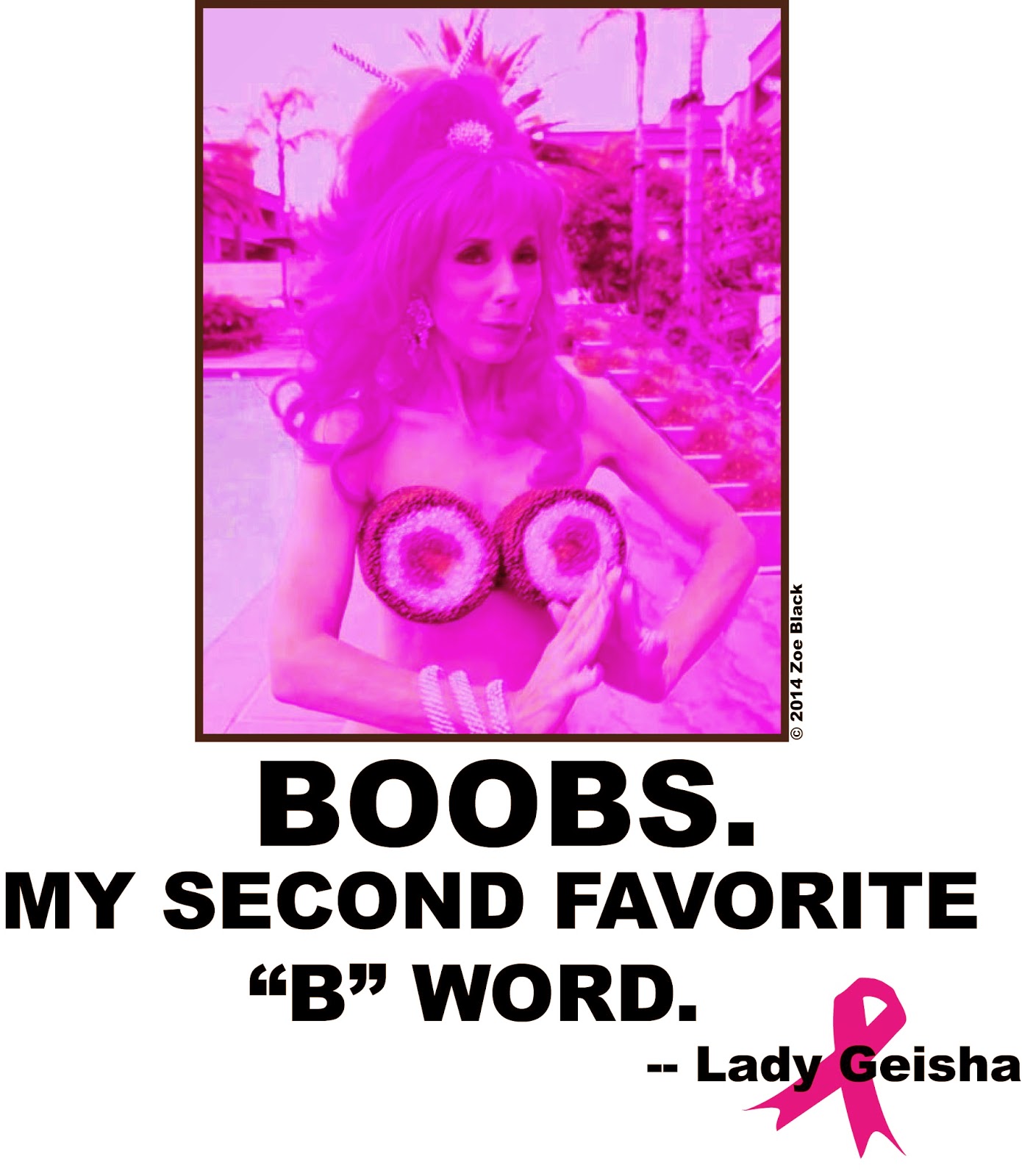 Usually my silly, snarky, and beyond ridiculous commentary on the obscure cracks me the hell up. (Hopefully you find the insanity just as funny.) But today, there are no jokes, no puns, no snarky remarks. I come to you with raw emotions and an open heart, asking for your help.

First, let me begin with a confession. My recent Facebook status about using my boobs to get out of a speeding ticket wasn’t true. Imagine that. Everyone thought my “resourcefulness” was quite clever, but it was merely part of an online rally to raise breast cancer awareness, like no make-up selfies or the flurry of users posting bra colors and “where they like it” on their walls.

This time, those who like or comment on any of 14 specific status updates are instructed to repost one of the statements with no further explanation. Users must then forward the chain mail-style message to anyone who likes or comments on their own status and so on.
A few weeks ago, I unknowingly liked a friend’s “Just-won-$7,000-on-a-scratchy” post. I was thrilled for her and amazed at such fabulous luck. Heck, maybe she’d even take me shoe shopping. (Okay, probably not, but I was so inspired I purchased one for myself.) All good fun … until it wasn’t.
After reading the “campaign” message the next morning, I felt slightly obligated (read: emotionally blackmailed) to select and post one of the 14. Some of the statements were grossly disturbing, but I figured that’s the point – healthy people feeling uncomfortable is nothing compared to fighting the disease … right? Am I not willing put my own discomfort aside to show support?
Despite minor procrastination, I made the update. Hence, my boobs doing double duty. Immediately I regretted the post, especially when explaining to everyone that it really didn’t happen. So there’s that. All day long I thought of family members who died way too young from breast and other cancers. I thought of friends I've lost and those who've miraculously survived their battles, proving what true strength really is. Wow -- how freakin' lucky am I to be healthy, alive, and blessed on so many levels?

For whatever reason, I kept questioning my participation. Solidarity goes a long way, but what was I (or any of us) really accomplishing? If one woman scheduled a mammogram that could potentially save her life because of what we've posted and passed on, would that validate the movement? Is any awareness good awareness? My inner pit bull-with-a-steak just wouldn’t allow me to let go of it ... was there a higher purpose?

I researched similar online campaigns for more perspective and discovered multitudes are downright outraged, claiming stupid “Facebook/social media games” demean the battle against breast cancer. My heart sank as any impulse I ever had or action ever taken to support this (or any cause) was always sincere. It bothered me to think that participating could potentially be misconstrued as indifference to a disease that had taken family from me. This also raised a red flag -- if social media movements of this nature were so horrific, why were celebrities being praised for the recent no make-up movement that stormed Facebook, Twitter, and Instagram?

Additional findings revealed that many others feel just as strongly that anything goes, especially since social media reaches a younger audience who might not pay attention to traditional awareness campaigns. (Case in point: no make-up.) Both sides presented strong cases ... and then it hit me.
Advocacy isn’t enough – I needed to escalate things to the next level. What differentiates the current "Facebook 14” and bare-faced celebs is that the #NoMakeupSelfies campaign actually raised over $13.1M for charity, a nice chunk of change to help further research, education, and preventative care.

So why can’t we do the same by changing a status? I believe we can and have created a way that participants of this, the bra color, and “where I like it” movements can add meaning behind good intentions while truly making a difference.
I’m proud to launch Lady Geisha's “Put Your Money Where Your Facebook Status Is” Campaign to raise funds for the Breast Cancer Research Foundation, an organization that utilizes 91% of all donations to sponsor over 200 researchers in 12 countries worldwide and educate women on preventative care. How can YOU contribute? There are several ways, which I'd like to explain.

The "Put Your Money Where Your Facebook Status Is" online store is filled with products featuring the infamous 14 status updates. By purchasing t-shirts, mugs, caps, cards, and a myriad of other items bearing the statement you selected, 100% of ALL profits will be donated to the Breast Cancer Research Foundation. Which did YOU post? 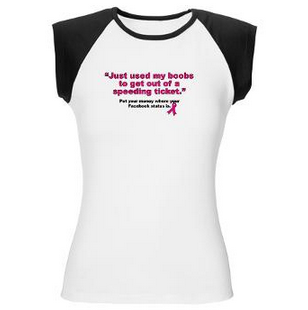 Status update swag not your thing? I've created the "Put Your Money Where Your Facebook Status Is" Fundraising Event Page on the Foundation’s main site so supporters can contribute directly to the cause by making an online donation via Team Lady Geisha. Just visit the page, add your name to our team members, and donate any amount. We'll list all new team members/contributors on our brand-new community Facebook page, Lady Geisha's Breast Cancer Combat, as a special thank you.

I'd like to ask everyone who's changed their status, supports the campaign, made a purchase, and/or joined Team Lady Geisha as a contributing member to submit a 3-5 second video selfie of themselves simply saying "Put Your Money Where Your Facebook Status Is!"

Individual clips will be incorporated into a compilation video which will be featured on my YouTube channel and other social media sites. How can YOU submit? Please post all video clips to our community Facebook page, Lady Geisha's Breast Cancer Combat. Why?

By submitting your videos for inclusion in our compilation video, we can build campaign momentum, prove the power of raising awareness through social media, and encourage corporate partners, mid-sized companies, smaller businesses, and anyone in the arts/ entertainment industries to become fundraising sponsors via our campaign hashtag #PutYourMoneyWhereYourFacebookStatusIs.

Sponsors can pledge specific dollar amounts each time our hashtag is used across social media, helping us raise significant amounts that will assist the BCRF in getting that much closer to a cure. (Sponsors may also donate a set amount.) All sponsors will be listed on my website, here on the blog, and on our community Facebook page -- plus we’ll promote the campaign on all our social media pages (and aggregate sites) where Lady Geisha and GEISHA-MANIA!™ have a brand presence. If you own a company/small business and are interested in becoming a sponsor, please message us using the Contact tab above for further information.

HELP US SPREAD THE WORD

We all know it takes a village ... and thanks to Facebook, Twitter, Pinterest, Instagram, Google+, and SnapChat, etc., villages in the digital age span the globe. Even so, goals can't be accomplished single-handedly. Which is why I need your help.

Now, I’m not setting a $1,000,000 goal (wouldn’t that be totally kickass?), but if everyone purchases products, makes direct donations, submits video selfies, and spreads the word by sharing this post as well as the campaign hashtag and all our links, we can show the world this ISN’T A GAME and that supporters really do put their money where their Facebook status is.

If we all take a minute to come back to reality after Coachella, the MTV Movie Awards, and a visit to the tax preparer, the strength in our numbers will kick cancer in the ass. Let’s finish what social media started … and prove we’re not playing.

Please visit the Charity Page on my website for more info:
http://www.geisha-mania.com/charity.html

Donate directly on the “Put Your Money Where Your Facebook Status Is” Event Page:
http://www.fundraiseforBCRF.org/putyourmoneywhereyourfacebookstatusis

For Press and Sponsorship Inquiries