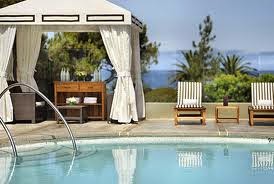 Spring has sprung and though there may still be snow in some spots (hear my tiny violin playing?) it's time to start thinking about bikinis, boys, and beach blanket BLING-O! (Okay, maybe not in that order.) IMO, lounging poolside drenched in gallons of glitz is the shizz ... especially with a bevy of buff man-candies catering to my every whim. See how that's done? Bikinis, boys, bling -- boom, all in one shot. 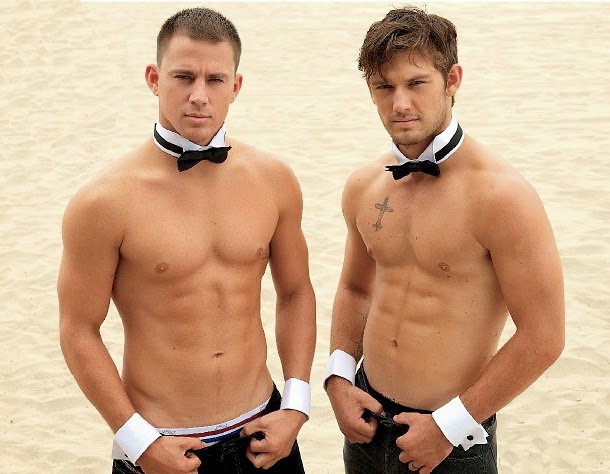 Now for the finer points. (Listen up chicas, this is key.) Real bikini bliss means the teenier the better. (I can't believe I just said that.) Burn those bandeaus, maillots, and tank suits. Why? Because they make me shudder? No sillies, smaller gets you bigger, and I ain't talkin' gherkins. Big as in rocks -- the sparkly kind. This concept's easy, but hopefully you're not. (Make'em work for it, love muffins.) 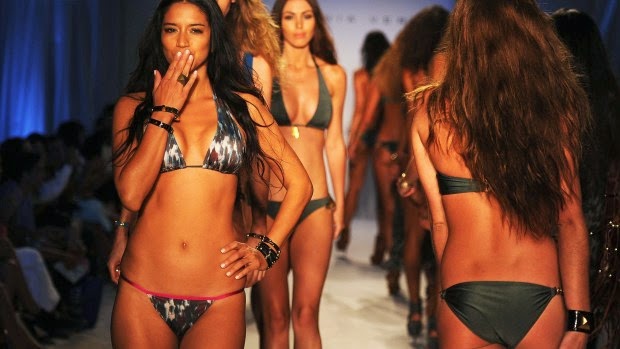 Speaking of bling, break out the big baubles because itsy-bitsy bikinis alone just won't cut it. Who needs SPF 20 when there's 22K? Think blinding brilliance. Think strappy heels and spray tans. Think diamond-encrusted toe thongs. Okay, maybe that's way too much thinking for you, but damn girl, women exist to be memorable. Haven't the "Real Housewives of Beverly Hills" taught you anything? 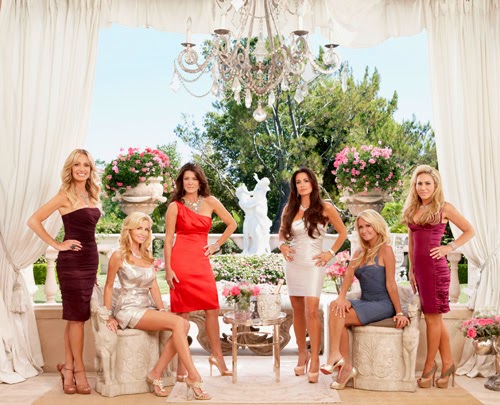 For those plebeian times when we venture away from the cabana and don actual clothing (ugh, must we?), I've comprised a checklist of spring 2014's top fashion trends. Word of caution -- I'm showing you the BEST (designer duds) examples right off the runways. It's up to YOU to figure out if you even come close. There's a finely stitched line between true style and white trash wonderland. What's a geishanista to do? Besides running back to the pool? MAKE IT WORK PEOPLE! 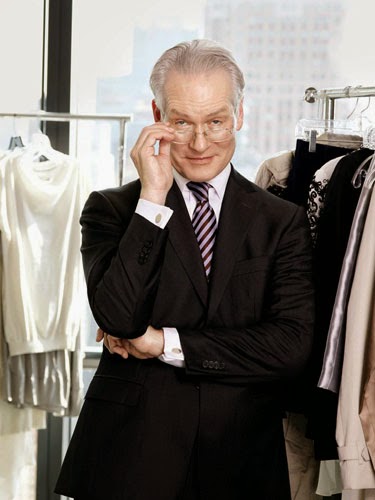 He masters making it work.

1. Crop Tops
Every muffin top's nightmare is that mofo crop top. (Unless you're Kate Moss or the people of Walmart.) Here's a crazy question ... WHO makes these freakin' decisions? Is it kinda like a Seventh Avenue Illuminati plot to eliminate weaker, fashion faux pas-wearing fools? Tread wisely. 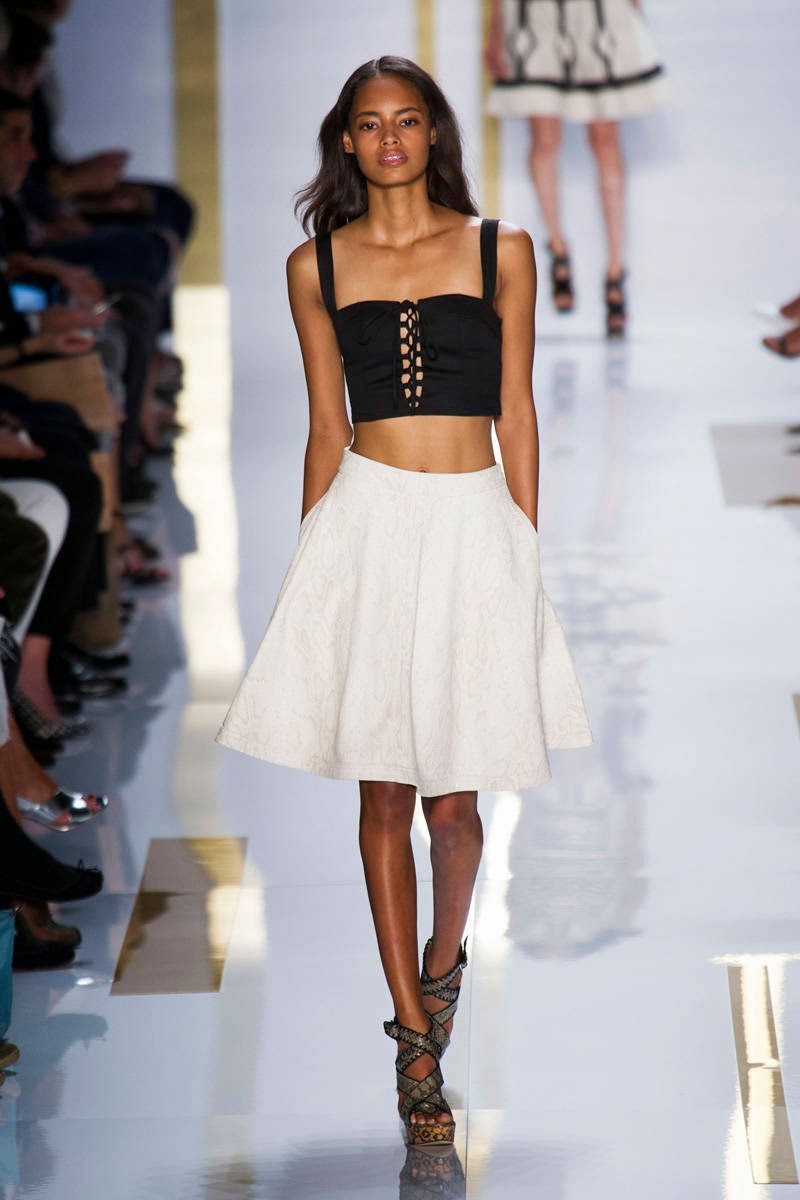 2. Fringe
Is this the wild, wild vest? Don't get me wrong -- I keep up with trends just like any other gold-blooded geishanista. But when said trends take a nosedive into making me look like a bad 70's sitcom or, more specifically, that little ginger kid in "The Partridge Family," then I rest my case. Just stop it. Please. 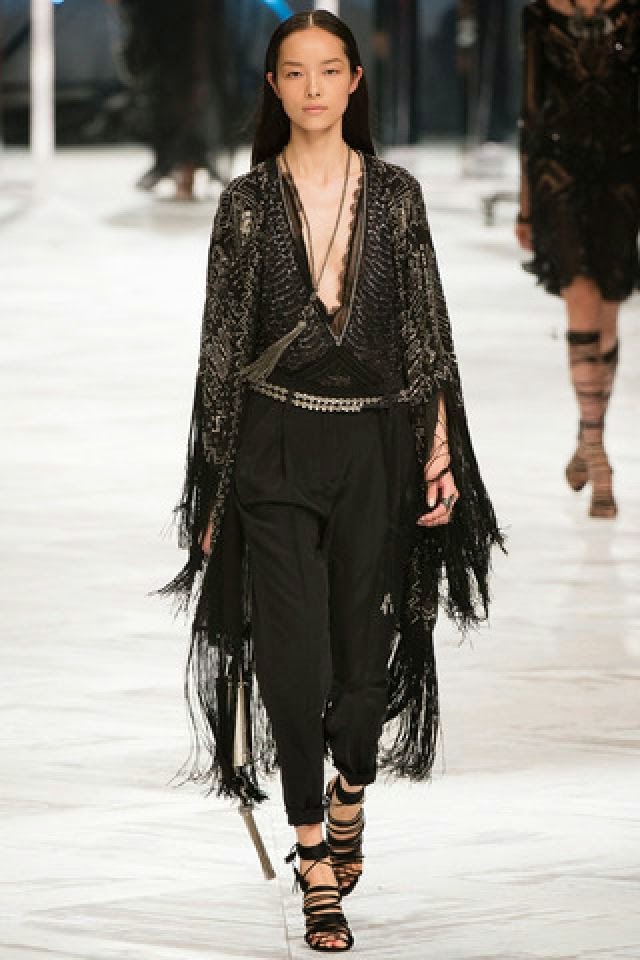 Roberto Cavalli is a fringed god.

3. Holographic Clothing
Beam me up, bitches! Perhaps if you're Captain Kirk this Klingon-inspired garb could be cool, but any trend that remotely intrigues Trekkies or suits William Shatner (at any age) does not suit me. Period. 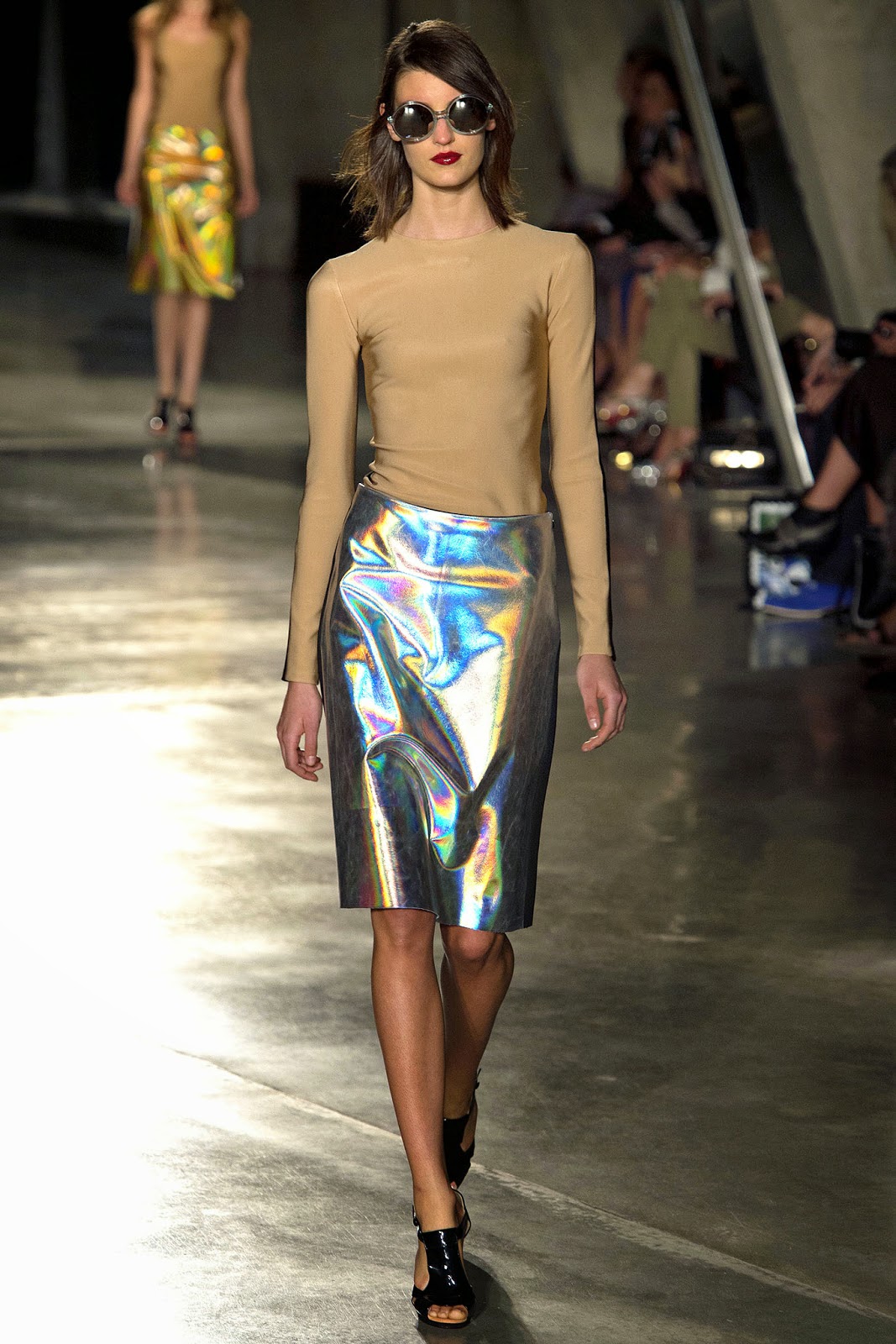 Jonathan Saunders is outta this world.

4. Sheer
Call it a heyday for pervs, but I say see-through's been done. Relentlessly. The only ones falling for it (yet again) are those who really shouldn't ... and it ain't pretty. Sigh. Fashion repeats itself, but let's put this one out of its misery. 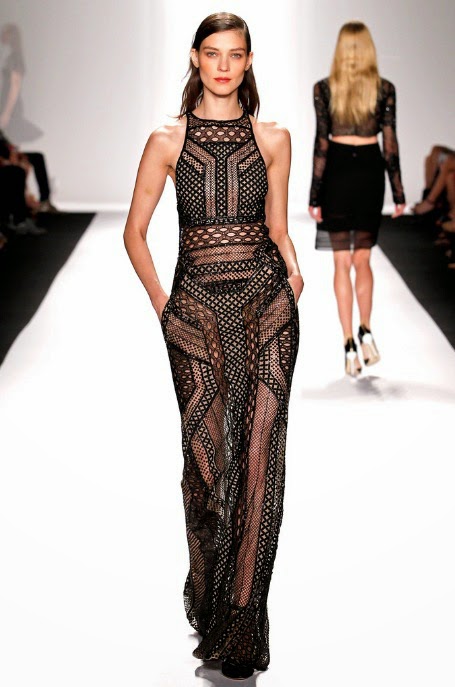 J. Mendel shows how to shine in sheer.

5. Trench
Wanna buy a watch? Again, perv city. That is all. 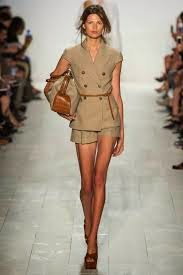 6. Mesh
Everybody spread the word, we're gonna have a cel-e-bra-tion! Oh, wait, what? Now that was a tangent. Madonna called and wants her fingerless gloves back. Enough said. 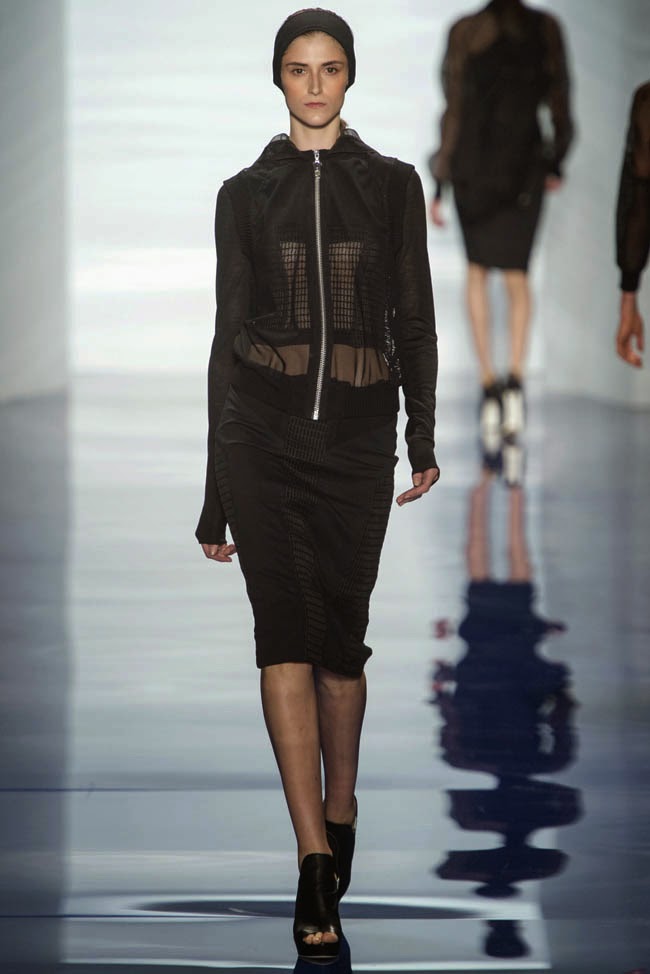 7. Tribal Trippin'
I'm all for marching to the beat of a global drum, but do the fashion powers-that-be make a pact to puke up the most unrelated concepts possible, deem them as trends, and see who's suckered into it just to amuse themselves? I'm guessing "Yes." 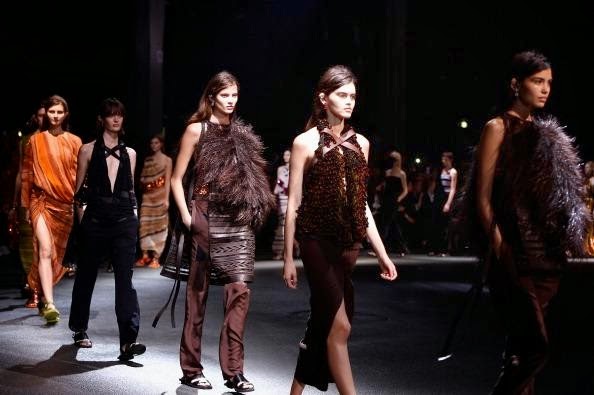 8. Athletic Looks
If Varsity wasn't my thing in middle school, what makes anyone think I'd go for it now? Let's leave gym clothes in, um, the gym, thank you. Plus, this creates a cross-trending travesty when mesh is added to the mix -- like the athlete's foot fungus of the fashion world. I rest my case. 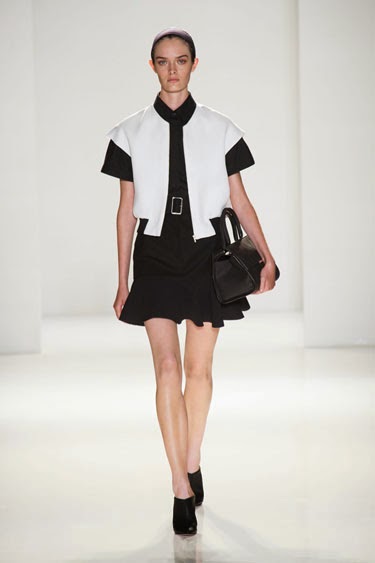 9. Bright Colors
Is New Wave making a resurgence? Must I break out the mohawk? I bet Andre Leon Talley's laughing his Cavallis off at anyone making this Flock-of-Seagulls flub. 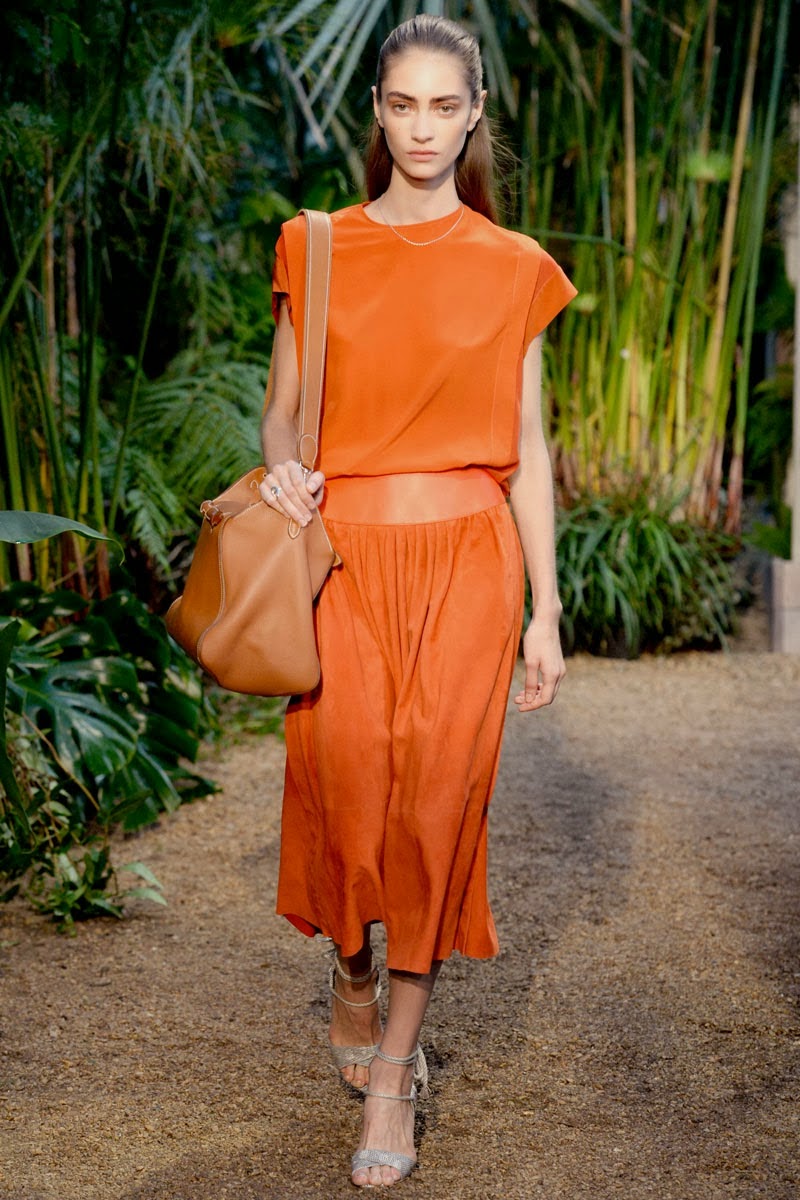 Orange is the new black at Hermes.

NOTE:
I actually invented the word "fugly" (don't play dumb) back in the 1980s and have witnesses ... kind of like MY original joke, "Why did the monkey fall out of the tree?" Answer: "Because it was dead." I made that up one night at a bar while walking around telling twisted jokes. I didn't really have answers to any of the random questions I asked complete strangers, which is why "Because it was dead" became my go-to fave. Years later, a comedy club promoter told me that my first attempt at standup (hey, I was walking around!) was one of the biggest jokes on the party circuit. Imagine that. Who knew vodka and cranberry could unleash comedic genius?